Picture this: It’s 1890, you’re in Taormina on holiday, and you’ve just been invited to tea at the private island residence of the Lady Florence Trevelyan, cousin to Queen Victoria… 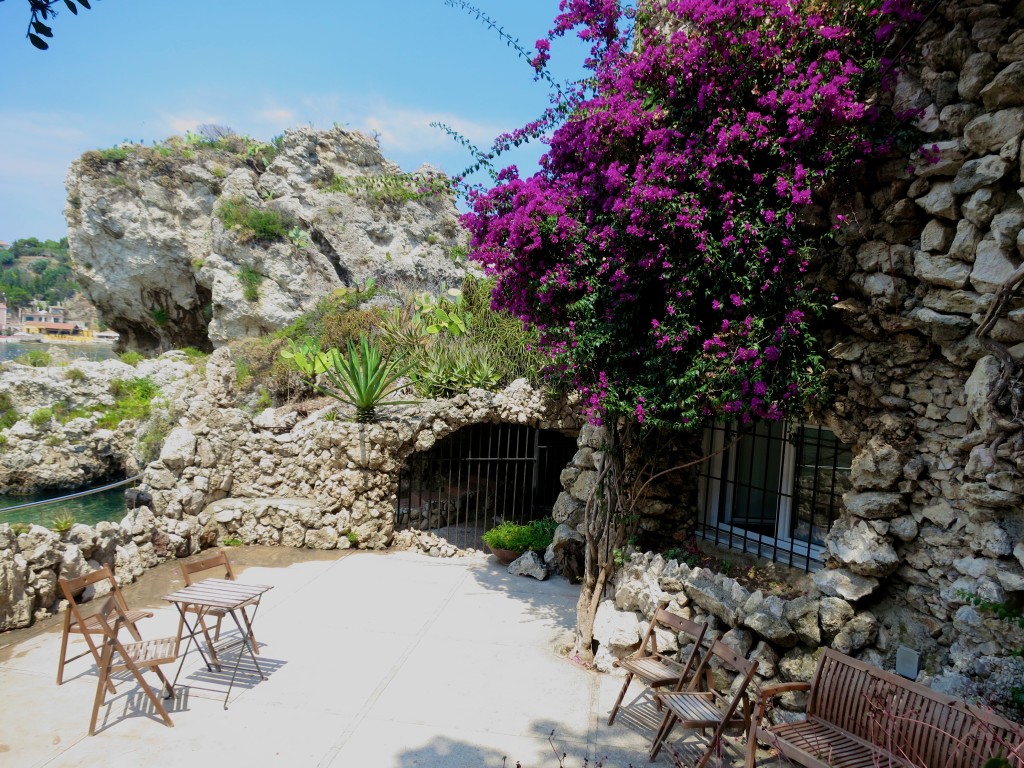 Back in the day the Isola Bella was bought from the city of Taormina by Lady Trevelyan, where she built a small home (because her eclectic residence in Taormina’s public gardens just wasn’t cutting it) and planted some of the still standing cacti and olive trees. 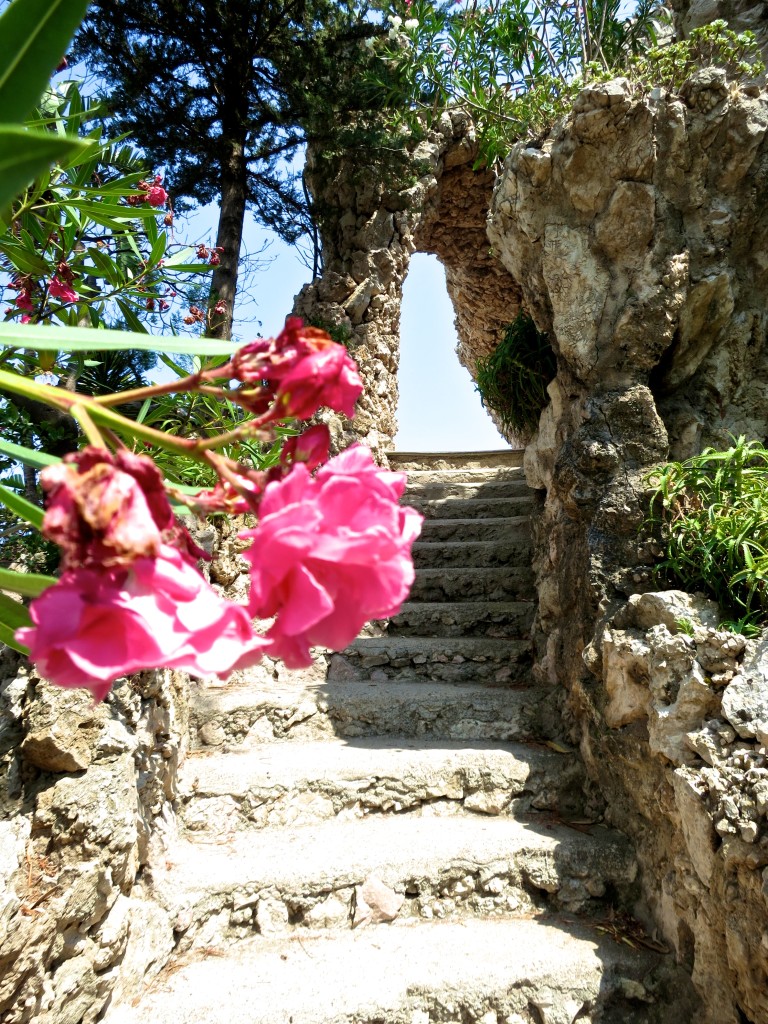 Around 1938 Isola Bella was bought by Adriana Bosurgi as a gift to her sons Emilio and Leo.  Being from Messina, she thought it was best for the boys to have a place to go fishing when they came to Taormina and Taormina Bay’.  From that gift was born an architectural feat that was beyond the knowledge and capability of most architects of the time.  From the 50’s to the 90’s Emilio Bosurgi took it upon himself to build a multi floor villa (complete with salt water swimming pool) that not only provided each family member with a bedroom, ante-room, and bathroom, but was also completely integrated into the natural landscape of the island.  Rock walls that doubled as doors, exotic plants and flowers from over seas, personally handcrafted ironwork, tinted windows to utilize natural sunlight, no angular or modern structures or designs….in other words, the epitome of harmonious and non-invasive.  Over the years he and his family lived on the island and during the film festivals hay day they hosted sporty and elegant luncheons where all the stars, directors, producers, etc. could lounge, swim, and eat in peace and comfort.  When you visit Isola Bella and her surroundings you can fully understand why the Marchese Bosurgi family (now over 1000 years old) was so dedicated to respecting and maintaining the natural beauty of the island.

The absolute best way to see Isola Bella and all the grottos surrounding it is by boat.  Aside from the fact that with this heat there’s no better place to be than swimming around in the turquoise depths, the truly mystifying part of a trip to the grottos are the local fishermen who accompany you and seduce you with the stories that for centuries have been told about these places. 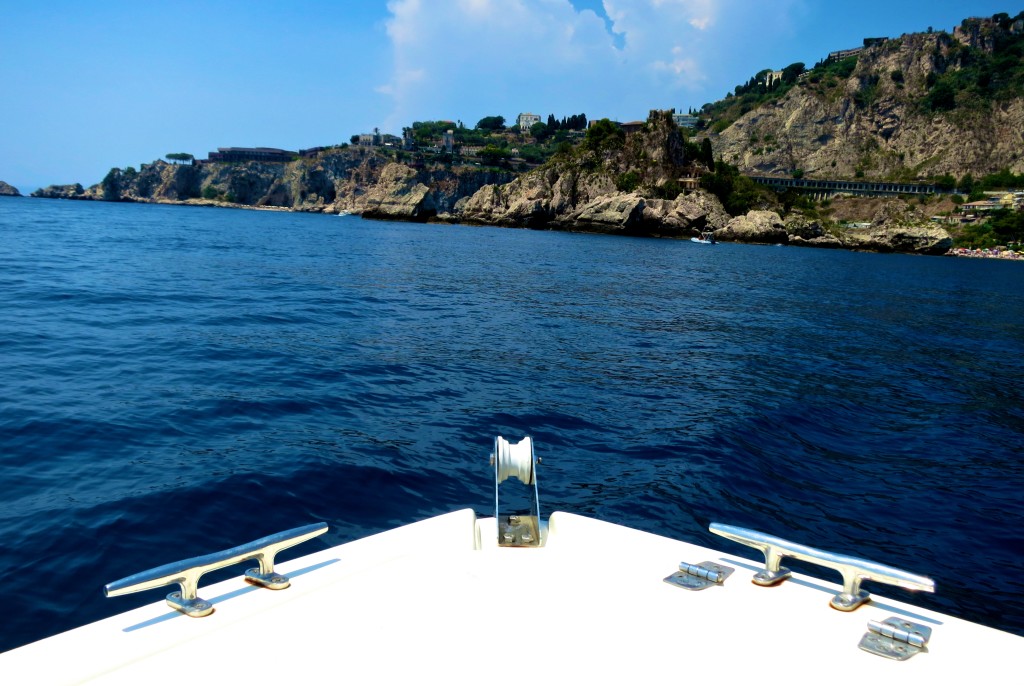 Situated perfectly in front of Isola Bella and Grotta Azzurra (the most popular of the areas grottos for diving and snorkeling) sits a charming restaurant and lido.  I arrived there around midmorning hoping to have a little chat with Francesco and his father Vittorio, who founded the restaurant along with his brothers over 40 years ago.  As Francesco explained, what was once a small and easier going restaurant situation, with a limited menu’ and old school cooking style, is now a booming lido.  The restaurant/lido is still very much a family run business, and you’ll find someone from every generation of the family making sure everyone is happy and comfortable. 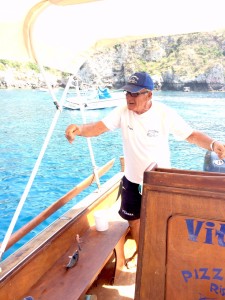 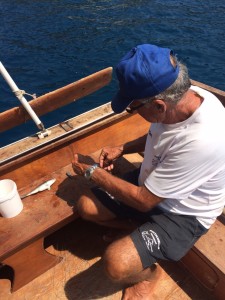 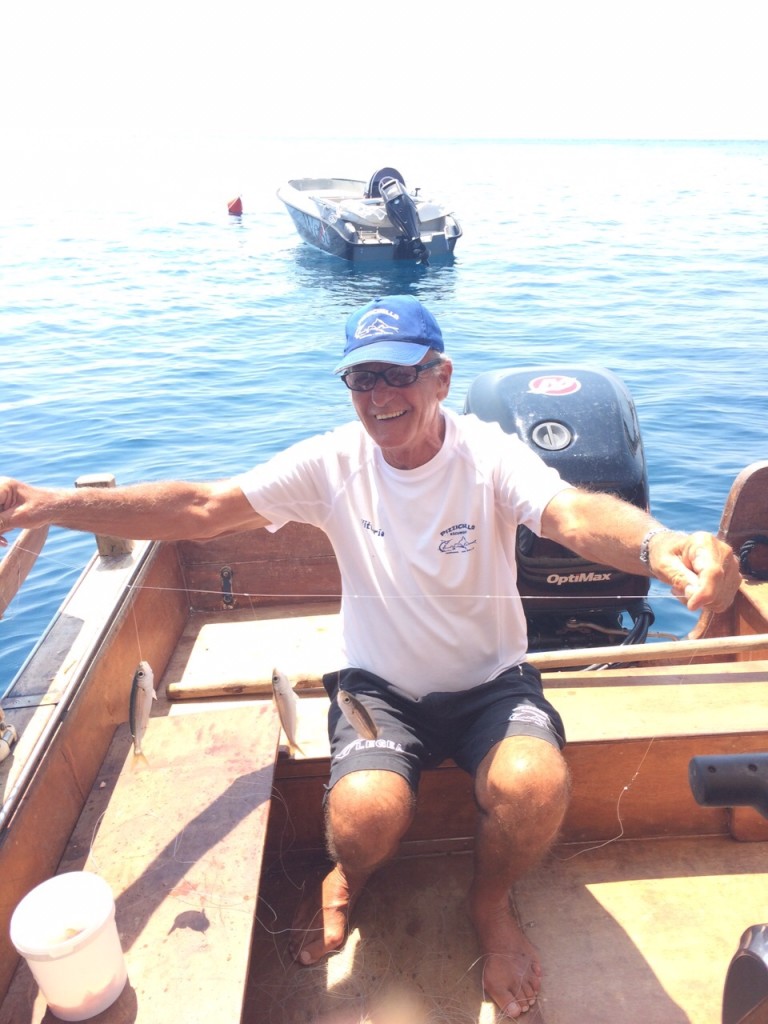 However, what I fell in love with the most about my conversation with Francesco was how he spoke about his father, Vittorio (when he wasn’t around, obviously 🙂 ).  After decades of hard work first as a fisherman then as a restauranteur and fisherman, Vittorio spends his “retirement” accompanying his guests to the different areas around Isola Bella and still passing more time on the water than on land.  He’s the one to go to for the stories and folklore behind places like Grotta del Giorno and Grotto dei Innamorati, but don’t be surprised, because no two fishermen will tell you the same tale!  Francesco explained it best though when he told me that it’s not so much the real story that matters, but more the storytellers own experience. 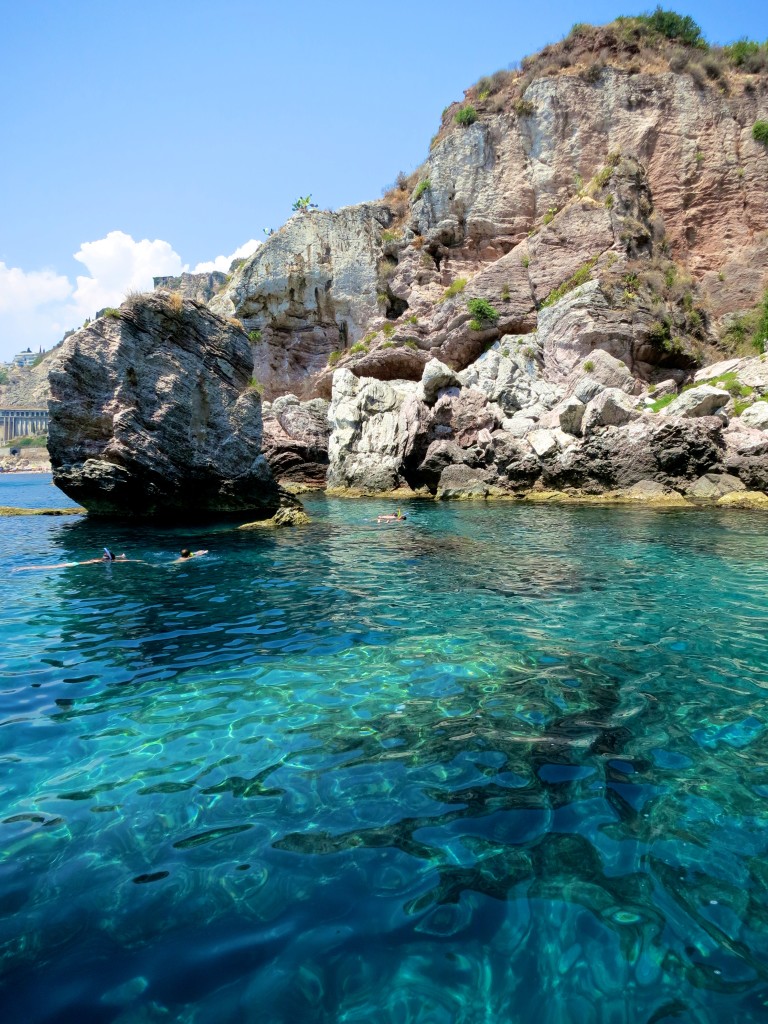 I was embarrassed to mention that after 2 1/2 years here I still had never visited any of the grottos, and it took all of 30 seconds for the true Sicilian hospitality to shine through, and I found myself on a boat going on my first tour around the Isola Bella.  A charming boy named Federico was lovely enough to show me EVERYTHING there is to see in the area. Grotta Azzurra, Grotto del Giorno, Grotto dei Innamorati, Grotto del Corallo, this awesome rock formation that looks like an elephant (no joke), and gave me his own explanation for how they all got there names and what type of secret histories lie beneath the surface!! 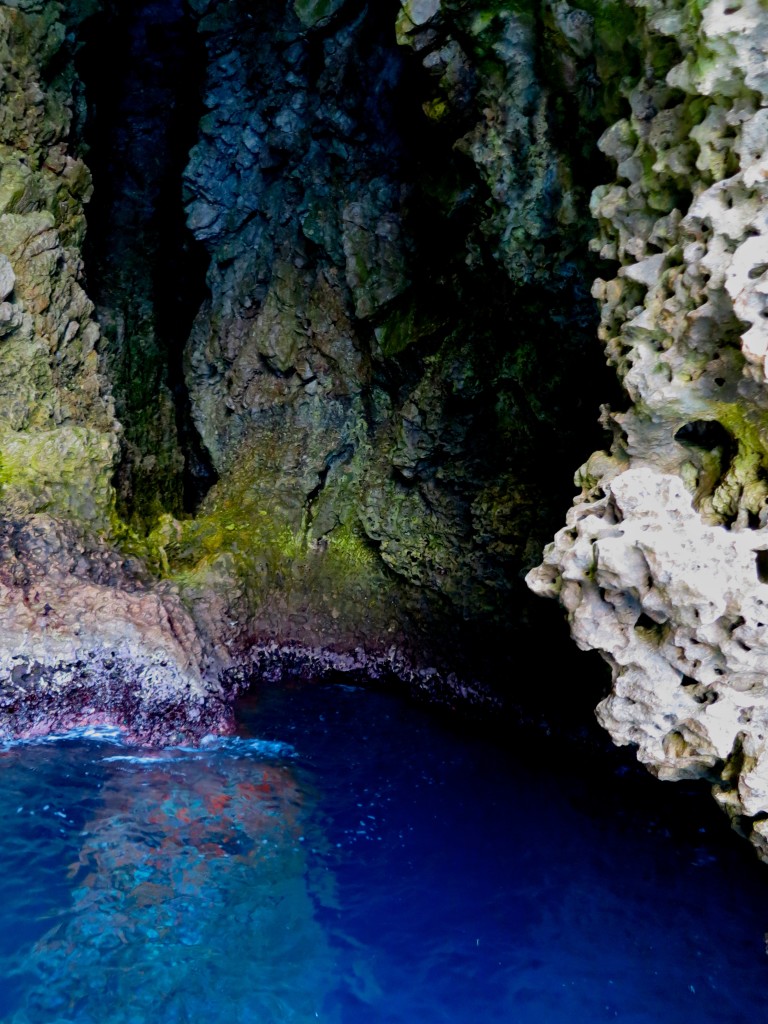 So, at the end of the day I may not have been able to have tea with the queen’s cousin on the terrace of Isola Bella, or lounge with my idols of the silver screen, but a private boat tour and one-on-one made it a day I won’t be forgetting any time soon.  And I know what you’re thinking…”But Sarah, what about the seductive stories you mentioned way back in the beginning??”…. Sorry everybody, you’ll just have to go hear for yourselves! 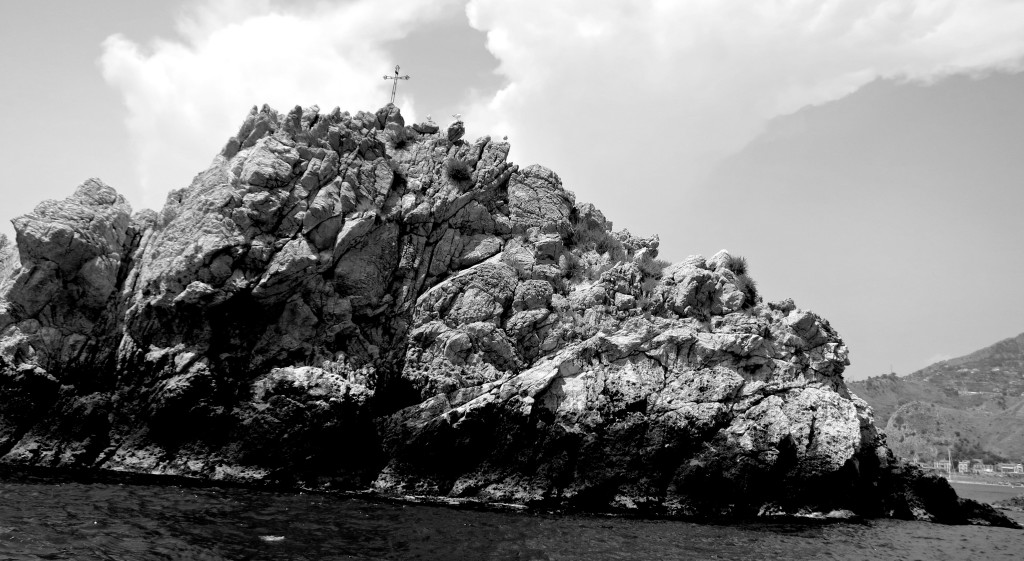