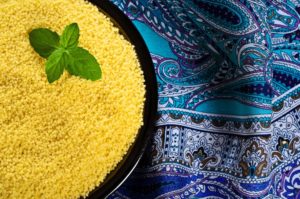 Everybody knows that going to Sicily means culture, folklore, and of course the best food in the world (n.d.r.)!

Sicily has always been, since ancient times a place of dominations: Greeks, Normans, Spaniards, Arabs and many other populations have brought their own culture and their own traditions we can now see reflected in our history, our different styles of architecture, and in the magnificent extent of food varieties Sicily has.

Cous Cous is one of the most typical food you can find in the west coast of Sicily and especially in Trapani and San Vito Lo Capo, where in September takes place the Cous cous Fest! A festival dedicated to this great tasty dish, mix of two cultures: African and Sicilian.

The cous cous was originally born in North Africa and it is still a traditional Moroccan dish arrived to Trapani during the arabic domination.

The difference between the two different varieties of Cous Cous is the ingredients. In the african version there is basically lamb and mutton, intensified by the use of Maghreb spices,  while in the Sicilian variation the key ingredient is obviously fish. 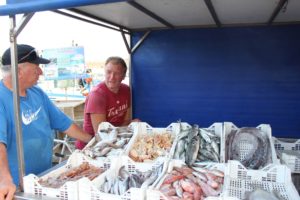 But this is not  the only difference, the secret ingredient of the Cous Cous alla Trapanese is the tasty and unique  fish broth!

The key to preparing an authentic couscous Trapanese is patience and care. The first step  is making the couscous, forming small balls of grains by sprinkling hard wheat with water and assembling the cous cous with the hands. This process in Sicilian is called “incocciata”. Then this grains are steamed in a specific pot “la cuscucussiera”, using a part of the soup made with: scorpionfish, grouper, scampi and prawns. 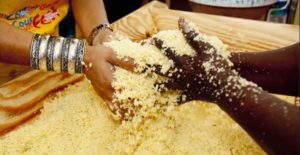 This soup permits to maintain the right texture avoiding the formation of skeins in order to seasoning it with tomatoes, garlic, almonds and other ingredient depending on the recipe.

Here the Recipe of the traditional Cous Cous Trapanese:

Wash the fish and eliminate the head and the fishbones, with the leftovers prepare a broth with water, celery, carrots, e laurel. Let it broil and at the end of this process, filter the broth. Slice the remaining fish and make a soffritto, sizzling in a pan chopped onions, oil, garlic and laurel. Add peeled tomatoes and the fish, cover with water adding minced almonds and a pinch of chili pepper. Cook the sauce until it will be dense and firm, then add salt.
Boil the broth prepared at the beginning and pour it on the cous cous inside a bowl, stirring with a fork until the grains will enlarge. Serve it with the fish sauce. 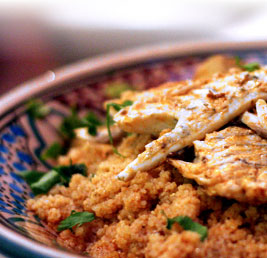 I'm 26 and Sicilian since my first breath! I've lived in this wonderful country for most of my life with brief but unforgettable intervals in New York, Tanzania and Turin!✈️ I completed my Communication and Foreign Languages studies in 2014, but I'm still studying to become a Sommelier in the very next future! ? Travel Lover, Wine Lover, Sicily Lover!
Categories:Food & Drink
2 Comments

Aperitivo; What is it and why do we love it so much?

Ode To An Arancino (Al Ragu’)