Taormina has flourished and has become the pearl of the Mediterranean, not only for its position and its natural and historical heritage, but also because of exceptional people that during the 19th and the 20th century have
chosen Taormina as their home.

Lady Florence Trevelyan played a strong role in the human and artistic development of Taormina. English noblewoman, friend of Queen Victoria and her son Edward, she had first visited Taormina in 1881 and she was so enthusiastic about the town that therefore decided to come back and spend more time (though rumors say she moved to Taormina after she was exiled from England after having an affair with Edward, Queen Victoria’s son). She came back in 1884 accompanied by her cousin Louise Herriet Percival and five dogs.

Since she was u 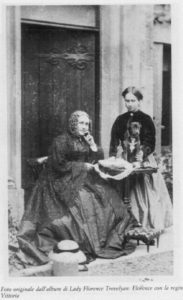 sed to a comfortable and noble life she asked family La Floresta, owner of the now 5 stars luxury Grand Hotel Timeo , to rent an entire floor and to furnish it to her own taste.

Despite initial hesitations from La Floresta family, they finally accepted and she moved with her dogs to the Timeo.

She was a young and beautiful lady who truly enjoyed spending time in the countless wonders of Taormina: the Greek Theater, Isola Bella, which was her property for a period of time and where she pl
anted some rare species of plants. But she also visited  the hidden spots in the countryside like mount Venere and mount Ziretto.

Her life changed when one of her dogs was seriously ill and she could not find any vet in Taormina. The only person that could help her was a local doctor, Professor Cacciola, who although initially reluctant, seeing her desperate for her dog , decided to help her and saved her dog’s life.  The two then met up a several times and eventully got married in 1890.

Florence left the Hotel Timeo and moved to her husband’s house, a huge property with  a wonderful park in which she created her English corner then called “Hallington Siculo” as a tribute to her hometown in England.

She spent most of her spare time working in her garden,  enriching it with new rare plants and flowers of every kind and species.

Lady Trevelyan Cacciola spent the rest of her life in Taormina raising money for various  charities organizations, helping out local girls providing them dowries, financing poets (she also financed Oscar Wilde after the release from its imprisonment) and spending time with the growing English community of Taormina. 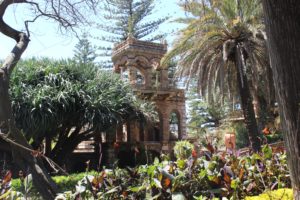 I'm 26 and Sicilian since my first breath! I've lived in this wonderful country for most of my life with brief but unforgettable intervals in New York, Tanzania and Turin!✈️ I completed my Communication and Foreign Languages studies in 2014, but I'm still studying to become a Sommelier in the very next future! ? Travel Lover, Wine Lover, Sicily Lover!
Categories:Insider's Guide
1 Comment

We inform our dear clients that due to the COVID-19 outbreak, our operations are currently suspended as per the Italian Government indications.
We are deeply sorry for the inconvenience. We are monitoring the situation and we will keep you updated.