Who, coming at least once to Sicily, has never seen a Moorish head in a balcony, or in a traditional Sicilian Restaurant, or in the many pottery shops we have?

The art of Maiolica pottery was brought to Sicily by the Arabics who taught Sicilian how to create these wonderful objects, now real peieces of art.

In he thirteenth-century, the Spaniards of Aragon were the first who referred to colored Sicilian ceramic objects as “maiolica”, because the  firing and glazing techniques used to create these pieces were similar to those used in the Balearic Islands of Majorca.

There are many different types of items that can be crafted, distinguished by their color patterns, the shape and the motifs painted on the pottery.  But, without any doubt, the most popular and fascinating ceramic objects are the Moorish Heads or Teste di Moro.

Walking through the many narrow streets of Taormina, you may end up in Via degli artisti, an incredibly beautiful street embellished by Sicilian Majolica ceramics designed by a local artist. At the top of his house you will find these beautiful ceramic heads pots where blooming plants grow inside. 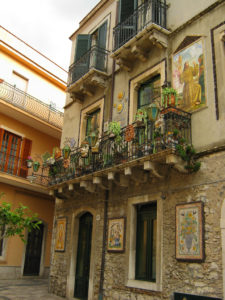 The legend of the Moorish head goes back in the XI century, during the Moors domination in Sicily and as in most legends, is once again Cupid’s fault (or credit).

One day, a beautiful and honorable young girl living in the Kalsa, the arabic district of Palermo, was taking care of plants and flowers in the balcony of her house as she was used to. Suddenly, a Moor merchant who was passing by, fell in love with the beautiful girl who immediately returned his love.

They started having a love story until when she discovered he already had a wife and children waiting for him in his native land. She went suddenly crazy of jealousy and one night, while he was sleeping she thought of a way to make him stay with her forever!

She therefore cut off his head and cleverly decided to use it as a vase to grow her beautiful basil plant.

People walking down her balcony started looking at her flourishing plant of basil and became jealous of how bloomed her plants were, so they began to forge colourful clay heads pots wishing to have the same magic green thumb.

Today there are several varieties of ceramic heads, but the traditional ones show a black man and a beautiful girl. 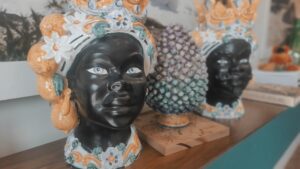 True or not, romantic or creepy, today these Mori represent the Sicilian ceramic art all over the world, thanks also to Dolce&Gabbana, who often use characters and items of the traditional Sicilian folklore and have recently launched a collection inspired to the Moorish Heads.

These unique pieces of art and the legend behind them have taught us one important thing: if you ever fall in love with a Sicilian girl, be careful not to break her heart!

I'm 26 and Sicilian since my first breath! I've lived in this wonderful country for most of my life with brief but unforgettable intervals in New York, Tanzania and Turin!✈️ I completed my Communication and Foreign Languages studies in 2014, but I'm still studying to become a Sommelier in the very next future! ? Travel Lover, Wine Lover, Sicily Lover!
Categories:Culture & Events, Insider's Guide
Tags:art, Ceramic, pottery, Sicilian, Sicily, vase
21 Comments